Happy Monday. Today I’ll be recapping Sunday’s class about freedom and sanctification along with part 2 of mishpat, or Biblical justice.

This class, like most classes, covered some pretty deep philosophical ground as well as theological. This class started with the “freedom from vs. freedom to” dichotomy. You as a class was quick to catch on that total and absolute freedom is anarchy, and I postulated that true freedom is not a lack of nor absolute, but finding the right set of constraints. I offered these constraints in the form of the list of virtues that we’re free to constrain ourselves with, according to God’s will. I’d like to talk briefly about this picture of constraint and how sanctification comes directly from this.

Negative freedom is much ‘easier’ – think of the list of vices we talked about (greed, laziness, stealing, lying, anger, adultery to name a few) – to see and identify. You know when you’re cheating on your wife (I’d hope). You know when you’ve told a lie. You know when you’ve stolen something. I say this because I fear many Christians are much more comfortable with having negative freedom, a freedom from, relationship with sanctification. It’s easier not to do bad and say, “Yes, I’m free from those bad things,” than to consistently live in a positively free way. Let’s elaborate on the other side.

Let’s focus on the fruit of the Spirit so I don’t have to write out all thirty or so things I had – love, joy, peace, patience, kindness, goodness, faithfulness, gentleness, and self-control is the list I’ve learned. If we’re honest, this list is much harder in life to live than not doing vices. Love, for example, sometimes mandates you’re blunt and honest with someone, maybe even to the point of hurting their feelings for their good. Kindness often means you’re inconvenienced, as does goodness. Making peace in life, with people, through forgiveness is incredibly hard – it’s much easier not to hate them rather than make peace and love someone. You get the point. Virtues are a lifestyle, while vices are actions. A lifestyle developed around love 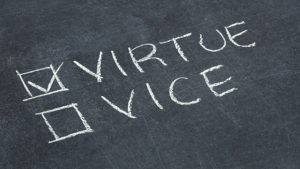 takes maintenance, grace, and intentionality, which is a concise definition of sanctification.

As we talked about, there is a both/and when it comes to sanctification, briefly defined as being developed into the best reflection of Christ you can. We are sanctified, or made holy, set apart from sin for God, by God Himself upon our salvation, but that is both an event and a process. From the event of being sanctified from all sin, we begin a journey of sanctification, of being made more and more into the image of God He created. We participate in this process by choosing how we act, how we live, our habits – virtues or vices. Being like God isn’t just not doing something sinful, but it is about living and actively being a certain way, actively loving because God does, actively making peace because God does, living out self-control because God controls Himself. Thus the virtues we focus on and actively try to make our lifestyle, that struggle and trying is indeed sanctification, which comes from focusing on what we ought to do to be like God. Thus, positive freedom, the freedom to or for something, is much more valuable and worthwhile than negative freedom only from sin. Positive freedom constrains us in a way that makes us like God, and that is a good thing.

Oh boy, where to begin. This sermon was mainly brought on by my reflections about what to do next. Now that we know what Biblical justice is, what do we do about it? That’s the million dollar question, isn’t it always? There are a few thoughts that don’t necessarily cohere together, yet relate to the idea, so I’ll offer these for your consideration.

I mentioned yesterday that silence equals injustice, that if you see someone who is vulnerable and needy and do or say nothing, that’s unjust. While I believe that’s true (I wouldn’t preach it otherwise!), it was commented yesterday that those who do a lot of talking aren’t helpful either. I think both extremes are true, and just because one is true doesn’t make the other false. Talking without action is as unjust as silence. This is a hot topic right now in our culture, with victims of sexual assault and molestation attempting to speak out after being silent for years. Let me put in writing now that sexual assault, molestation, and intentional harassment is never acceptable, and if you’ve been a victim of it, I encourage you to speak out. The point is

though, God looks at that or any situation where someone’s mishpat, someone’s dignity of Imago Dei, has been attacked and holds those who knew but remained silent, without advocating for the victim, just as accountable as the perpetrator. That applies to many situations, and it still holds true.

Secondly, let’s talk politics (AAAAAAAH)! No, not how politics affects this, but how this affects our view of politics. Let me borrow from Michael Sandel’s book Justice in which he identifies three frameworks of justice: utilitarian or justice for the common good, liberal which emphasizes individual rights, and conservative which focuses on ethics and morality. If you’ve been listening the last two weeks, you’ll (hopefully!) immediately see that Biblical justice encompasses all three. God cares about what is right for the communities and best for all, through the lens of the rights of an individual(both the rights to act and the rights inherent in being created) which then God judges moral or not. In my humble opinion, all modern politics have done is polarize issues, stigmatize people groups of all kinds, and perverted how true grace and mercy loo 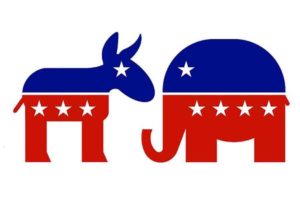 k. Do not let social or political norms define what Scripture says is justice.

Finally, as I mentioned towards the close of the sermon, these two Sundays have not answered all the questions, and in fact, may have raised more. That’s good. It is good that we even ask the questions of how close are we to this idea than not ask at all. There is still clarification to be made on many points. One talk I had after the sermon focused on those begging for money on the street. Is justice giving them money? Making sure they spend it well? Is that your responsibility? Is throwing money at the problem even the right idea? Is handing a $5 fulfilling your making right relationship between you and them? Is that making their problem your problem? What if they’re dishonest, have they broken their mishpat or have you by not doing something?  Those are questions to ask and work through.

Only by asking and endeavoring to answer can we ever hope to move closer to who God is, and shine His light in this world brighter.

I’m praying for you. Grace to you.

When is church? Where is church? What if it was all the time, & everywhere we go? Northern Hills Church of Christ strives to live as the church, as Christians devoted to Christ's teachings & example. Church isn't just something we do, it's … END_OF_DOCUMENT_TOKEN_TO_BE_REPLACED