Every Sunday is a great Sunday. Thank you all who made it yesterday to share it together.

So I referenced two reasons why the source and authority for ethics lies with the very nature of God & nothing else. I’ll briefly elaborate on them here.

The question is, “Are things wrong because God has said they are or does God command things because they are already right or wrong?” Saying the source is Scripture doesn’t negate this dilemma, therefore the source isn’t there. Here are the difficulties of this question: 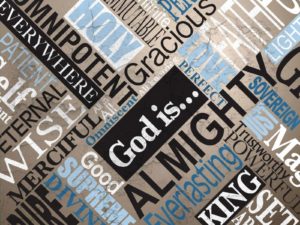 Indeed, the source for morality & ethics is the very nature of God Himself, His character, His heart if I may. Therefore we look at not only descriptions of who He is, but how He’s acting throughout time to give us the better view of what is indeed moral & ethical. What is right is what God is. What is wrong is what God isn’t. And ethics are much clearer and much more conscientious that way.

As I mentioned, the whole interpretation of “…on this rock…” and “…what you bind shall be bound…” is very controversial and not explicitly clear in the text. If you disagree with what I taught yesterday – that Jesus saying to Peter on this rock I’ll build my church probably best means both a metaphor to the surroundings as well as Peter & the apostles’ role in the early church, and that the binding & loosing was their teaching what it meant for the Kingdom to come to earth (in a nutshell) – you’re perfectly free to do so, and I invite you to let me know why you disagree and what your conclusions are. I’d sincerely love to hear them.

About the binding & loosing, something I DID forget to mention (always something) that that in those days one of a rabbi’s main interpretive jobs was that of binding & loosing. He’d interpret the old law, and write commentary (Mishna, Talmud, Gemara stuff) about what was bound (prohibited) or what was loosed (allowed). They would do this all the time. The law says don’t work on the Sabbath. Therefore you can’t take more than xx steps (binding) but you can take xx many xx number of times (loosing). Thus with that language, I believe Jesus at very least was saying they would be bringing what is bound & loosed in heaven to earth in the new covenant. Hey as I said, it’s confusing language, but fun to study.

I hope you all have a great day. I’m praying for you. Grace to you.

When is church? Where is church? What if it was all the time, & everywhere we go? Northern Hills Church of Christ strives to live as the church, as Christians devoted to Christ's teachings & example. Church isn't just something we do, it's … END_OF_DOCUMENT_TOKEN_TO_BE_REPLACED