You are here: Home / Sermon Recap / Sermon & Class Recap – November 4th
Share
What an opening Sunday for November! I noticed we were quite full in the auditorium, and the singing worship has been quite encouraging, which of course it usually is anyway. Well, let’s get back into yesterday:
Class: Practical Ethical Questions
Sermon: Names of God: God of Heaven
Quick Notes:

There’s not too much, at least in my mind, to recap. We started talking about some questions to prep for some more ethical scenarios coming up. One thing I’d like to bring up again is the concept of sanctification and being spiritual as a habit. James brought up that practicing vices or virtues is much like practicing habits, that you have to develop and sometimes rewire your mental pathways to do or not do certain things. This emphasizes both

disciplines, realizing and intentionally practicing certain things, we well as repetition, which then implies opportunities to deliberately do the things we’re trying to make a habit. For example, if you need to practice your love, who are you intentionally trying to love that’s hard? If your mercy needs to be increased, in what ways are you trying to be merciful? If you want to give more, what ways are you looking to give?

Also, it was brought up (I’m sorry, I can’t remember from whom) that your thoughts influence behavior, i.e., what you think on becomes what you do. This isn’t just a good thought; it’s a psychological fact. This is why just not doing vices doesn’t work – if you still are dwelling on them, you’re not moving towards God. Therefore, what you DO dwell on eventually becomes your action, which can be powerful. Even if it takes 99 times of doing the wrong thing while striving towards the Godly thing if, after the 100th time that’s now your habit, that’s worth it.

Oh boy, many much things to talk about from this sermon. I’ll focus on three things: the ‘metaphor’ of heaven (read on), the concept of heaven, and future heaven.

I began with talking of how we shouldn’t mistake real metaphors for the real things behind the metaphor, that we shouldn’t mistake the scales of justice, while they’re indeed real, for what true justice is and how it can manifest in the world. Meaning, we shouldn’t get too concerned with what the scales look like, how tall they are, how much can be put on them, etc. for what the scales represent. I was not saying heaven is a metaphor. God’s space, heaven, is a real place. But how heaven is used in the Old Testament is mainly to connect the transcendence of God with who God is or something He does. In other words, when heaven is referenced it’s used to describe something about God, not where God is. Because, as Genesis 1

tells us, where is God? He’s here. He’s never left Earth, but the barriers between God’s space & human space, and specifically how to enter that space, have been more defined due to sin. Hence which brings us to the ‘hotspots’ of access to God’s presence – the tabernacle, the temple, Jesus.

Here’s why this matters – if you only believe that Christianity is to make us “good” enough to take us away to somewhere better, it’s like a worker who’s only working to get to vacation. You don’t really care about what or who’s around you day by day, all you want to do is get to vacation day, to get away. Now imagine that you’re a worker that is working on a company retreat with peers. You’ll not only be working on the day, but you’ll be trying to excite your co-workers, be talking it up, emanating excitement, and trying to be the lightning rod for energy. This is our task as Christians.
So what does this do to the concept of heaven in our minds? Well, it should become a lot more like God’s kingdom. We’ve talked about how the concept of kingdom isn’t a place, but the reign and authority of God. Heaven, then, while it’s like kingdom in that while there is a realm, a place, where God reigns, it’s more about God’s reign in that place. It makes sense in the Lord’s prayer: Your Kingdom, Your reign, O God, in human space as well as God’s space. It doesn’t negate any concept of the afterlife, but it brings the eternal life aspect of Heaven to the world now. It’s nearly cliche now that 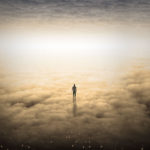 church should be a little bit of heaven on earth. Perhaps we should take that seriously.
I was asked well what about Heaven, meaning the place we go when we die. There is life after physical death with God, in His presence, for those in Christ. This is a fact. It is not a metaphor, symbolism, or myth. But, if you’ll allow me to be blunt, I do not think that the conventional concept of Heaven is necessarily Biblical, at least in function. I would challenge you to challenge yourself on what preconceived ideas you may bring to particular texts, perhaps especially about the afterlife, but on any subject as well. Concerning life after death, I do see much more emphasis on resurrection as well as the desire to again bring God’s space and human’s space back together with no barriers than I do merely a disembodied existence. And, I see that not only in the New Testament but the Old Testament as well. What all that means, in all honesty, I’m still learning and working through myself, and my current thoughts are much more extensive than I am inclined to write in this blog at this moment. But in the end, what exactly the afterlife and what God’s plan is matters less than making sure we’re with Him to experience it. Whatever it is, it’ll be far better than we can imagine, I’m sure.
Our mission is to be a place where heaven and earth meet with the confident expectation, the faith, that for us in Christ we will then meet God with no barriers one day. And whatever else there is about the subject, I’m sure the God of Heaven has made it far better than we could imagine.

When is church? Where is church? What if it was all the time, & everywhere we go? Northern Hills Church of Christ strives to live as the church, as Christians devoted to Christ's teachings & example. Church isn't just something we do, it's … END_OF_DOCUMENT_TOKEN_TO_BE_REPLACED